Turn Back the Pages is a feature where I spotlight a comic that is not fresh and new. It may have come out a few months ago or even a few years ago. Maybe it was hyped and popular, or maybe it was an underappreciated gem. Whatever the case, it’ll be a great comic that’s well worth a read.

I’ve yet to read a weird west story that I didn’t like. And I have to categorize Pretty Deadly as a “weird western,” because “fantasy western revenge horror neo-folktale” isn’t an accepted genre. 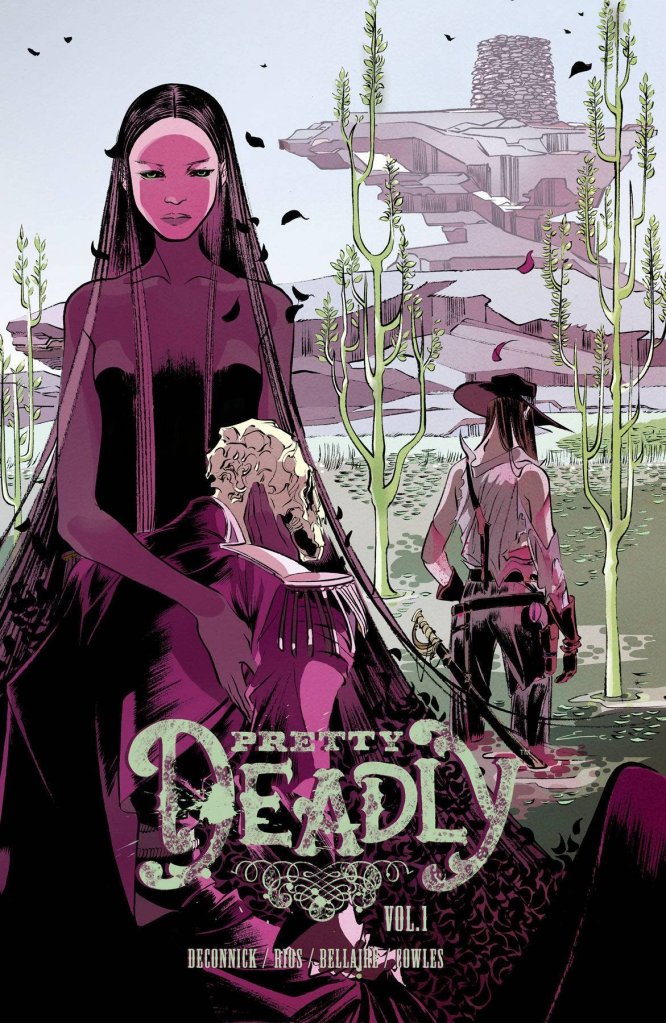 So what is this comic about? Good question. There’s an old blind man named Fox and a young girl named Sissy who travel from town to town telling “The Ballad of Deathface Ginny.” Then Sissy gets a mysterious piece of paper that sends them running for their lives.

There’s a rich man who marries a beautiful woman and locks her in a tower to shield her from jealous eyes, until she calls out for Death. And when Death comes, he falls in love with her.

There’s Johnny, owner of the mysterious piece of paper, who has a history with a scary bounty hunter named Big Alice and knows a talking raven.

Oh, and the whole story is being told by an undead skeletal rabbit traveling through the desert with a butterfly.

The narrative weaves all these stories together as it goes on, pulling the different characters together for a big showdown where the stakes are life–or make that death–as we know it.

“Pretty Deadly” is an apt name for the series. The art is beautiful even when depicting gruesome, morbid scenes, and it perfectly suits the dreamlike tone of the series. The scenes of the desert and dusty western towns are just as well-rendered as the eerie otherworld of the afterlife, and the book shines in those in-between spaces where the magic and mundane meet.

The coolest character is Deathface Ginny, the daughter of Death and the mortal woman he fell in love with. Here’s a snippet from her ballad:

He raised Her a Reaper of Vengeance,
A hunter of men who have sinned
If you done been wronged,
Say Her name
Sing this song

Sound the bell’s knell
That calls Her from hell…
Ginny rides for you on the wind, my child…
Death rides on the Wind!

Badass, right? She’s arguably the main character of the story, and if I have one complaint, it’s that we don’t get to know her enough. She wants revenge on the man who drove her mother to suicide–understandably. But we don’t know how she feels about being the reaper of vengeance or anything about her friends or relationships or what she does with herself when she’s not hunting down sinners.

I didn’t get much of a feel for her personality other than that she’s not someone you want to mess with. Which is a shame! She has such a cool design and backstory. Google her, and you’ll come across tons of fanart and amazing cosplays that show how much people like her. Her fight scenes in the book are amazing and her introduction gave me chills. Really, every scene she had was great–I just wanted more. 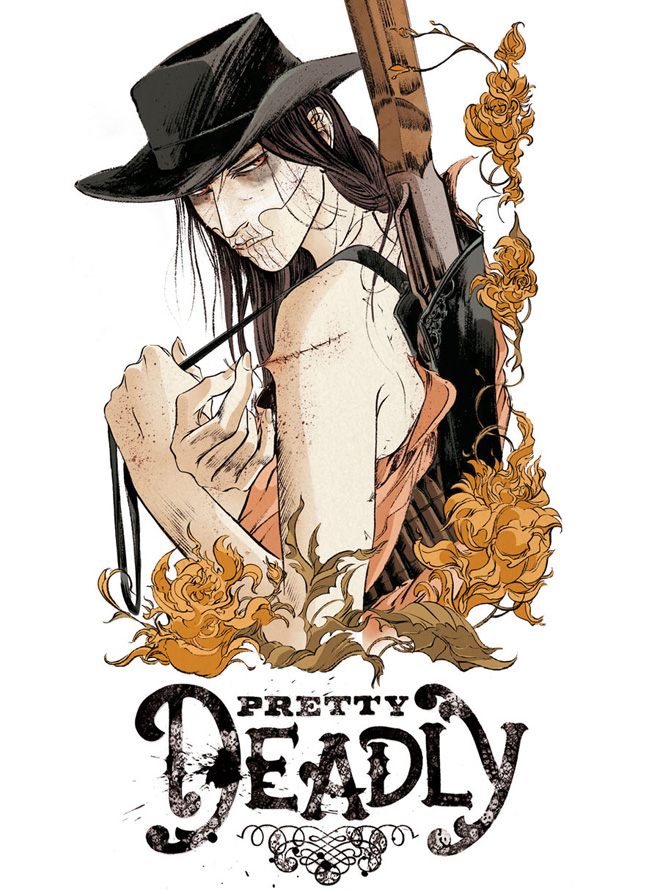 So while I have my complaints, Pretty Deadly is still a beautifully macabre read that will appeal to fans of weird westerns and magical realism. Hit up your local library for a copy like I did or find it at one of the retailers below.

Anybody else read this one? What’s your favorite weird west tale or hard-to-categorize story? Let me know in the comments!

2 thoughts on “Turn Back the Pages: Pretty Deadly”