That’s the tagline of Girl Genius, and the comic doesn’t fail to deliver. Read it, and you’ll get heroine Agatha Heterodyne’s adventures through a strange and dangerous alternate version of Europe where steampunk technology has run wild. She encounters a cast of quirky, memorable characters (half of whom are mad scientists or creations of mad scientists, and most of whom want to kill and/or use her) and finds romance along the way, though all of her relationships are “complicated,” to say the least.

By Phil and Kaja Foglio, Girl Genius describes itself as a gaslamp fantasy, but I’m pretty sure that’s just because it’s been around since before steampunk was a thing. You don’t get more steampunk than this. It’s got everything from clockwork ladies… 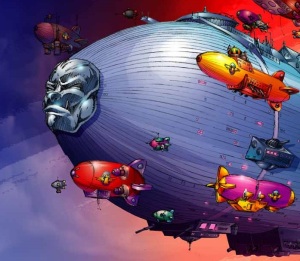 To the coolest coffee machine in the history of ever.

I could spend this entire review just listing all the awesome concepts, but I don’t want to spoil everything for you. Every chapter has something new and creative, and the plot is full of twists and turns. Girl Genius is a LONG comic. I count twelve volumes currently available for purchase, and those are only the printed collections that lag behind the new updates that go online every week.

With so many pages, it’s amazing that the story doesn’t drag, but Girl Genius is playing the long game. Places and people mentioned briefly in the first plot arc come back in major ways chapters and chapters later. Big mysterious events happened years before the start of the story, involving the fates of Agatha’s parents and a mysterious evil known as The Other. Agatha and the reader are kept in the dark about this backstory, gradually learning bits and pieces over the course of the story. There’s foreshadowing galore and a huge number of subplots.

But the best part about the length of the story is the room it leaves for character development. When we first meet Agatha, she’s a struggling student with low self-esteem, constantly humiliated because her inventions never work. As the story progresses, she becomes a badass science hero commanding minions and working to become one of the greatest powers in Europa. The transformation is gradual and believable and works so well because the comic dedicates so much time to it.

Agatha is just awesome in general. To stand out as the main protagonist amid the host of colorful and larger-than-life characters in this comic, a heroine has to be super interesting and sympathetic, which Agatha is. Plus, she’s a girl with her priorities in order:

I can’t list all the minor characters, but some of Agatha’s allies include Krosp, Emperor of Cats, a swordswoman and lost Amazonian princess name Zeetha, and a snarky and sadistic sentient castle. And don’t forget the Jägerkin, a race of genetically engineered monsters notorious for their love of fighting and fancy hats.

Agatha has two main love interests. The first, Gilgamesh Wulfenbach, is the son of Baron Klaus Wulfenbach, the iron-fisted ruler of Europa. Gil likes inventing more than ruling, though he’s forced to step up when his father is injured. He’s madly in love with Agatha, but seeing as his father believes she’s a threat to the peace and is determined to kill her, their romance has a few obstacles.

The third point in this love triangle is Tarvek Sturmvoraus. Luckily for him, his father never tried to murder Agatha. He and Tarvek just forced her into a machine that made the mind of their “Mistress,” The Other, possess her. The Other then used her body to try and take over the world. Tarvek eventually switched sides and helped free Agatha from The Other’s Control, but yeah… Good luck getting her to trust you again after that, buddy.

And I think I’ve spoiled enough of the plot. Get yourself over to GirlGeniusOnline.com and read the whole thing. It’s incredible that something this good and this long is available entirely for free online, so you should probably read it before the creators come to their senses and stick it behind a paywall. 😉 Once you fall in love, you can spend your money on a shiny print omnibus, the novelization, or any of the merchandise in the Girl Genius Shop. (There’s tea, stuffed animals, tabletop games, and all kinds of fun stuff.)

Girl Genius is one of the best comics on the internet. So whether you call it steampunk or gaslamp fantasy, you’re in for a madcap adventure once you start reading.