I love a good anthology. Getting a dozen stories in one collection, discovering new authors, diving into new worlds—what’s not to like? Fans of superhero fiction are particularly lucky, because there are a lot of good superhero anthologies out there. In honor of the release of Heroes and Villains, the new boxed set that contains Hero Status along with nine other novels, I want to spotlight four of my favorite anthologies and four on my to-read list.

Back in print after a decade, expanded with new original material, this is the first volume of George R. R. Martin’s Wild cards shared-world series.

There is a secret history of the world—a history in which an alien virus struck the Earth in the aftermath of World War II, endowing a handful of survivors with extraordinary powers. Some were called Aces—those with superhuman mental and physical abilities. Others were termed Jokers—cursed with bizarre mental or physical disabilities. Some turned their talents to the service of humanity. Others used their powers for evil. Wild Cards is their story.

Wild Cards is probably the first thing many people think of when someone says “superhero anthology.” The universe has existed for decades and has more short stories and novelettes in its various collections than I can honestly keep track of. Superpowers originated in the 40s in this universe, and you can find stories set in any decade from there on, the authors expertly merging superpowered plots with the political and social issues of the times.

“Shell Games” by George R. R. Martin, which introduces us to The Great and Powerful Turtle—and how can you not love a superhero with a name like that? The Turtle is telekinetic and encases himself in a metal shell that he floats around in. He’s also a total dork. Seriously, though, it’s hard to pick a standout story in this anthology, because they’re all so good.

The Pen & Cape Society, in conjunction with Local Hero Press, is proud to present The Good Fight, an anthology of superhero fiction from some of the best authors working in the genre. Collected within this volume are stories by Scott Bachmann, Frank Byrns, Marion G. Harmon, Warren Hately, Drew Hayes, Ian Thomas Healy, Hydrargentium, Michael Ivan Lowell, T. Mike McCurley, Landon Porter, R. J. Ross, Cheyanne Young, and Jim Zoetewey. After enjoying the stories in The Good Fight, please be sure to check out the works of the individual authors, because they’re just super!

I’m a big fan of the authors over at The Pen & Cape Society, who have been writing and promoting superhero prose fiction for years. The Good Fight is the first of their collective anthologies and a good chance to get a peak at the worlds of their various novels. Plus, it’s a free download, so you’ve got nothing to lose by trying it out.

“Archenemy” by Ian Thomas Healy. I love Mustang Sally, the heroine of Healy’s Just Cause Universe and a third-generation superheroine and speedster following in the footsteps of her mother and grandmother. (I’m a sucker for female legacy heroes like Black Canary or Vixen.) “Archenemy” follows Sally as she’s been recently promoted to the head of the New York branch of Just Cause, dealing with her internal nerves over her new position of authority and the external threat of an unexpected new enemy. It’s quick and action-packed and has everything you’d want in a superhero short story.

The Darker Mask: Heroes from the Shadows 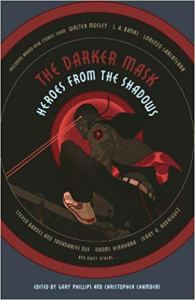 Expanding on the concept behind Byron Preiss’s Weird Heroes from the 1970s, George R. R. Martin’s Wild Card series, and Michael Chabon’s McSweeney’s Mammoth Treasury of Thrilling Tales, The Darker Mask is a collection of original prose stories recalling the derring-do of the beings we call Superheroes and the worlds they fight to save. But unique to The Darker Mask stories is that these plots and characters color a literary universe outside of what has been predominantly white, idiosyncratic, and male in previous homages to pulp. This is the stuff of urban legends, new mythos, and extraordinary folks who might live in a soon-to-be-gentrified ghetto, the dreary rust-belt of the city, or in another dimension. The Darker Mask offers an eclectic mix of popular fiction writers exploring worlds gritty, visceral, and fantastic.

I read this anthology around when it first came out, and some of the stories have stuck with me for all those years. Others were forgettable, but I’ve yet to read any anthology where every single story appealed to me. And though this book came out years ago, representation in superhero media is still very much an issue, and these stories are a great chance to read marginalized voices.

“Henchman” by Mat Johnson. No contest. This might just be my favorite superhero short story of all time. It skillfully addresses issues of class, race, and whether putting on a costume and beating up criminals is really the best way to make the world a better place—all while being witty and absolutely hilarious. I’m pretty sure the price of the anthology is worth it for this story alone.

Love is a literal battlefield as these couples find love while trying to save—or destroy—the world.

Powerless Against You features ten larger than life romantic tales of superheroes or villains in love. Get immersed in the drama of keeping secret identities, battling against a secret love, the struggle of coming into superpowers after tragedy, and much more.

These tales tackle a wide spectrum of couplings and characters that are sure to capture readers hearts.

I talked about this one in my post about superhero romance books. It’s an awesome collection of diverse superhero romance stories and has something to like whether you’re a fan of sweet, spicy, dark, humorous, gay, or straight romance. There’s a whole spectrum of different styles of superhero stories, too, and it’s a great read for anyone who wants a little more love amidst the action.

Oh. Oh no. I’ve limited myself to one story. There’s so many I like in here. Um…

“Toeing the Line” by K Orion Fray. It’s a super tough choice, but I love this one because its main character is a civilian who gets injured when a fight between a superhero and supervillain crashes into his apartment, because, as he puts it, “poor innocent buildings with nice views are frequently the first casualties when superpowers get into a fight.” It’s a nice look at the collateral damage of superpowered fights and an adorable romance, too.

I can’t review these next four since I haven’t read them yet, but they’ve been on my radar for a while, and I definitely want to check them out. 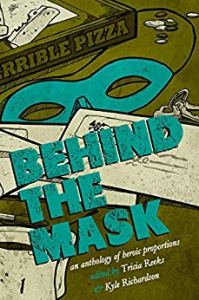 Behind the Mask is a multi-author collection with stories by award-winning authors Kelly Link, Cat Rambo, Carrie Vaughn, Seanan McGuire, Lavie Tidhar, Sarah Pinsker, Keith Rosson, Kate Marshall, Chris Large and others. It is partially a prose nod to the comic world – the bombast, the larger-than-life, the save-the-worlds and the calls-to-adventure. But it’s also a spotlight on the more intimate side of the genre. The hopes and dreams of our cape-clad heroes. The regrets and longings of our cowled villains. That poignant, solitary view of the world that can only be experienced from behind the mask.

The superheroes in BLACK POWER: THE SUPERHERO ANTHOLOGY come from all walks of life. Some have superpowers that make them something more, or less, than human, but others face a dangerous world with only their wits and willpower to aid them. Some of the heroes fight against racism, sexism, gang violence and police brutality. Others combat evil on a cosmic scale. ALL of the stories are entertaining and enlightening.

Black Heroes Matter. Read BLACK POWER: THE SUPERHERO ANTHOLOGY and find out just how much!

The end is nigh! The villains have won and the world will pay the price.

Feast your eyes on this feast of horrors. Twelve all original and never before published stories that’ll make you ask who the villains really are. Under the right lens, you might find your works to be dastardly, horrible—vile.

Discover what makes a villain in Jessica West’s “Villainous Origins”. What happens when a hero murders and refuses to take responsibility? Find out in Meta Universe author, Tom Reynold’s “Rare”. If you could see a crime committed in your dreams, would you tell? Hank Garner, of podcast fame brings an all new collection of diary entries from a “Dreamer”.

Read these and so many more exciting stories today for less than a quarter a story.

Paragons: An Anthology of Superheroes

They awe us. They fill us with wonder. But most of all, they inspire us – to be stronger, faster, and smarter. Superheroes teach us how to aspire to the best versions of ourselves. Enjoy this master collection of collection of 13 tales of all-new, all-original superheroes from today’s up and coming science fiction and fantasy masters!

When the police fail to take down the super powered mobs a rogue vigilante steps up to the plate in Nightstick by Kai Wai Cheah. Peek in on a superhero marriage proposal via Blackout by Morgon Newquist. When a young nuclear engineer gains superpowers, the Soviet government wants to control her for the sake of the motherland in Stalina by Sam Kepfield.

Any other superhero anthologies you’ve read and enjoyed? What do you think about these? Share your thoughts in the comments!

This post is brought to you by Heroes & Villains: A Superhero Collection, a boxed set of ten superhero novels, including one of mine! It’s available only for the summer of 2018, so check it out now!