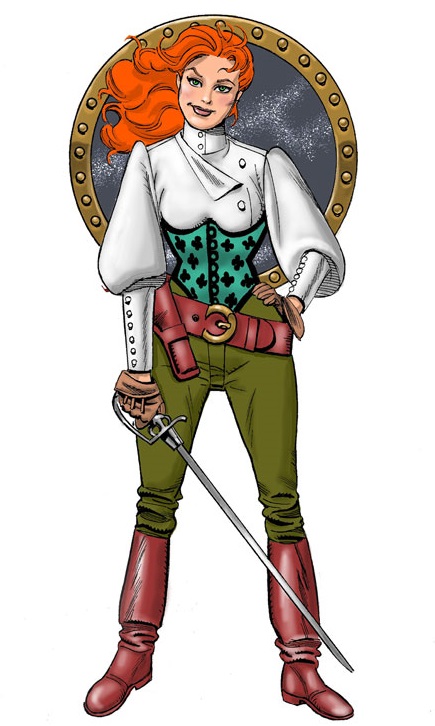 When was the last time you read some good old-fashioned swashbuckling adventure? It’s probably been too long, right? Well, brush up on your sword-fighting skills, because today we’re diving into Lady Sabre and the Pirates of the Ineffable Aether.

Here are just a few things you’ll find in the pages of Lady Sabre: airship pirates, steampunk robots, stone-cold cowboys, and tons of sword duels. Now, just because you throw a bunch of cool things into a comic, that doesn’t automatically mean you’re going to have a good story. But Lady Sabre combines these elements into an epic steampunk adventure. And it does it with style.

I’d say there are two main characters despite only one being mentioned in the title. The first, of course, is the lady herself, and to quote her own introduction:

“Name’s Sabre, Lady Seneca Sabre… Fourteenth Marchioness of Cascadia, Captain of Pegasus, muse of Darent Found, and a host of other titles that would probably bore you to tears if I recite them, which I shan’t, as I’ve recited enough.”

She’s a privateer, not a pirate, thank you very much, and she’s on a mission to retrieve a magical McGuffin for her monarch. Adventurous, witty, and an expert with a blade, she’s your classic swashbuckler archetype, and nothing that happens around her is ever boring.

Protagonist number two is Deputy Marshal Miles Drake, a lawman from an Old West-esque land. (The comic takes place in a fantasy world called The Sphere.) Taciturn and devoted to justice, he’s tracking a criminal who also happens to be an enemy of Lady Sabre’s.

The two of them end up in an “the enemy of my enemy is my friend” type alliance, though having different goals, they butt heads a lot. Drake is a stickler for the law, while Sabre plays by her own rules. It’s a fun character dynamic and leads to some good conflict.

There’s a host of minor characters, most of them members of Lady Sabre’s crew. The villain, known only as “The Smoke,” is a mysterious force alluded to in fearful whispers. His minions are trying to take the McGuffin from Lady Sabre at his bidding, and he isn’t seen on page until several chapters in—which is an awesome reveal that I won’t spoil for you.

If I had to choose one word to describe Lady Sabre and the Pirates of the Ineffable Aether, I’d call it a spectacle. This comic isn’t trying to reflect on the human condition or do an in-depth character study. It wants to give you huge airship battles, cowboys fighting robots, and good triumphing over evil. It wants to be fun and exciting, and it succeeds spectacularly.

If I have one criticism, it’s that I could use a little more depth to the characters, especially from Lady Sabre. But that wasn’t enough to stop me from getting swept up in the adventure and steampunk fantasy setting. There’s enough characterization to make the cast enjoyable, and the story’s climax is as much about Lady Sabre’s inner conflict as it is the huge fight scene aboard her ship, which I appreciate.

You can read the comic online, but before I give you the link, I have a warning. Like countless other webcomics out there, Lady Sabre was never completed. At the time of this writing, the last update was in January 2016, which leaves the epilogue incomplete. But don’t let that stop you from reading it, since it’s 99% finished, and there are hundreds of pages of awesome steampunk action. I recommend you just stop at the end of chapter thirteen and skip the epilogue altogether. Chapter thirteen is the complete climax and ends in a good place for all the characters and plot lines.

So if you like steampunk, pirates, or adventurous fantasy, get yourself over to IneffableAether.com and start reading.