It’s a new year, so time for new superhero books. We’ve got a lot of sequels this month, some some brand new series, and no shortage of nice-looking covers. As always, I haven’t read all these books personally, so make sure to view the samples and reviews before purchasing. And if you’ve read any of them, share your thoughts in the comments!

DUO – The One and Only

The Cold War. A world on the brink of annihilation.

The CIA and KGB fight a global shadow-war to claim every child who manifests a superpower in a high-stakes game of cat and mouse. The supernatural stockpile more important than nuclear weapons.

Alex Dwyer sits in a high-school cafeteria talking with a pretty girl. Hits the lunch-table with an involuntary twitch of embarrassment.

Explodes the table into a million pieces.

Alex Dwyer brings the world one step closer to armageddon…

Cadence Phoenix. A girl with a rose tattoo, a body full of scars and an old guitar she plays like an angel. Two years ago she woke up in the trunk of a car with no memory, no clothes and no identification. She’s on the run, but she doesn’t know why. All she knows is everyone she gets close to, everyone that tries to help her, ends up dead. Someone doesn’t want her to remember and will kill to keep their secret.
But who is it, and why? CJ doesn’t know. But she’s going to find out.

Wayward: A Hero Will Rise

Night Terror, the greatest villain Starlight City has ever known, finally had it all. A beautiful girl she couldn’t get enough of. The city finally sort of liked her after she saved it from a giant robot attack. Now it was time to live happily ever after, right?

It turns out saving the city and getting the girl was only the beginning of more trouble. She wanted to be Starlight City’s villainous overlord, not the city’s heroic savior. The girl she can’t get enough of is also the world’s greatest hero, which made for a relationship that takes “it’s complicated” to a whole new level.

Oh, and there’s a new villain in town looking to take a shot at the queen. Night Terror’s old nemesis Dr. Lana makes a hell of a villainous debut using tech she stole from Night Terror to rob Fialux of her powers! Now Night Terror has to deal with a new challenger and a hero who’s still trying to save the world despite her dangerous lack of the flight, strength, and invulnerability that used to keep her in one piece.

Villains aren’t supposed to save heroes, but that’s just what she’ll have to do if she’s going to get the girl, save the day, and defeat her new archnemesis.

It’s all in a day’s work for the world’s greatest villain!

After defeating their supervillain father, Bait and Switch are now seen as heroes rather than potential supervillains. Their classmates finally accept them and even most of their teachers have gotten over their distrust of the two. Life seems to be getting better and better.

But things take a turn for the worse when a superhuman terrorist organization targets the Academy. Their target: A mysterious new student whose power they want to use to throw the superhero community into utter chaos. 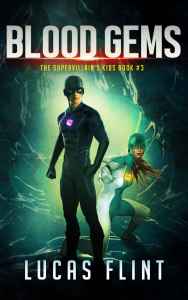 A field trip to the beach quickly turns into a nightmare when cyborgs attack Bait, Switch, and their classmates. The nightmare becomes even worse when two new and dangerous supervillains kidnap Switch under the orders of their master, a mysterious man known as the Collector whose true goals are an enigma.

To rescue Switch, Bait must seek the aid of his supervillain father, Tsunami, who will be able to help him locate the Collector. But Tsunami has plans of his own and Bait is not sure he can trust him, yet he must if he is to save his sister.

But even if Bait saves Switch, he may be unable to stop the Collector’s real plans.

You do not talk about heroes, villains, or powers. You do and you will disappear.

The Welcoming Committee was a success. New students continued to pour into Larkdale Secondary every week, now all able to easily find their classes, join the clubs they wanted to, and had a support system in case they needed anything. And they nearly stopped getting killed by the city. Nearly.

Many of them were restless, unable to even speak freely outside of the club room, and new transfers came with new ideas about how to deal with the problem of Whitten. With Matt still not recovered from last semester, Indira is hesitant to try anything, but she knows that it’s only a matter of time before one of them decides enough is enough and when they do, they will be killed by the Speckled City.

Still reeling from the shocking murder of his girlfriend, Fuse managed to put Michael Bello behind bars. But only days later, the murderer strikes a plea deal and is out. Now, he’s disappeared from public view. Ethan vows that justice will be done and starts the pursuit once again.

But another fiend is stalking the streets of the city; someone who leaves his victims stripped of their very skin. So far there are two victims and Ethan fears that the next will be someone he cares about. And the clock is ticking.