I don’t know which Batgirl is more underappreciated—Cassandra Cain or Stephanie Brown.

In my review of Cass’s run as Batgirl, I said that I’d be getting to Steph one day, and friends, that day is today. So get ready for the fun Batgirl! (Sorry, Cass, you’ll always be my favorite, but Steph just looks like she’s having the best time ever when she’s fighting crime.)

Who the heck is Stephanie Brown?

If you’ve never heard of her before, Steph is the daughter of a supervillain and Riddler-wannabe by the name of Cluemaster (who’s a jerk). She turned vigilante in her teenage years (as one does), and took on the hard job of being a non-Batman-affiliated crimefighter in Gotham City.

She called herself Spoiler, because she spoiled crime, I guess? In any case, it leads to her appearing in some fun“Spoiler Alert” gifs and images in real life, which is a cool claim to fame.

Her costume can only be described as the color eggplant. 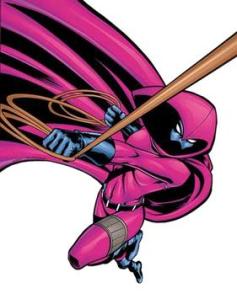 She was Tim Drake’s love interest during his time as Robin, and though she didn’t have his training and experience, she made up for it in determination and resourcefulness. What I liked about her character was that—in contrast to Tim—she was from the wrong side of the tracks. While he got access to all of Batman’s cool, high-tech toys, Steph had to work a crummy part-time job in fast food delivery to afford crime-fighting equipment.

When Tim quit being Robin thanks to his dad (who’s also a jerk, but in a different way than Cluemaster), Batman hired Steph to replace him. That makes her the fourth and most-often-forgotten Robin, and Tim took the news about as well as you’d think.

Steph eventually returned to her Spoiler identity, and when Cass stepped down from being Batgirl (for reasons I never really bought, but whatever), she passed the mantle to Steph.

Cass and Steph actually have a long and adorable friendship starting back when Cass was Batgirl and Steph Spoiler. They bonded over their seriously awful dads and had sparring sessions, Cass wiping the floor with Steph every time.

But Cass exits stage left after passing the mantle, so Steph’s solo book focuses on her relationship with the original Batgirl, Barbara Gordon.

I’ll now interrupt this review with a short rant on how Barbara Gordon is so much better in her identity as Oracle. Why did DC de-age her and put her back in the Batgirl costume? I like wiser, older, and snarkier Babs fighting crime from in a wheelchair in front of a computer. When the DC universe rebooted, all three Robins got to keep their own identifies. You didn’t see Dick Grayson getting stuck back in his yellow cape and green shorts. So why Babs?

Anyway, Babs isn’t thrilled with Steph taking on her old mantle, going so far as to threaten telling Steph’s mom if she doesn’t stop. Steph, of course, is pretty much defined by her inability to give up, so she keeps right on trucking. She beats Scarecrow in a hard-fought confrontation that impresses Babs, who reluctantly becomes her mentor.

They have a vibe that reminds me of Terry McGinnis and grumpy old man Bruce Wayne from Batman Beyond. The retired hero coaches the younger replacement out in the field via an earpiece and cameras, and lots of snark gets shot across the commlink from both sides.

The two of them bond, so that when Batman and Robin get all up in Babs’s business about training a new Batgirl and putting Steph in danger, she defends both the decision and Steph’s ability to handle herself.

And by the way, this is the book that finally made me like Damian Wayne as a character. He’s still a little brat, but his interactions with Steph are hilarious. They end up working well together despite arguing literally all the time, and he threatens to stab her a lot, which… okay, it doesn’t sound funny, but it is. Trust me, you just have to read the book.

There’s lot of great character work, and the plot is happening on top of Steph trying to attend college and keep her nighttime activities hidden from her mom. This might not be the friendliest book to new readers, since it draws on a lot of Batman comics history, but it doesn’t get bogged down in the details. The story moves at a fast pace, and there’s enough action and humor to keep you entertained even if you don’t know the backstory of every minor character who makes an appearance.

If you want a Batfamily book that’s fun and optimistic as opposed to grim and gritty, Batgirl Rising is a great place to start. Grab a copy on Amazon and let me know what you think!

Have you read this graphic novel? What are your thoughts on Stephanie Brown? Sound off in the comments!