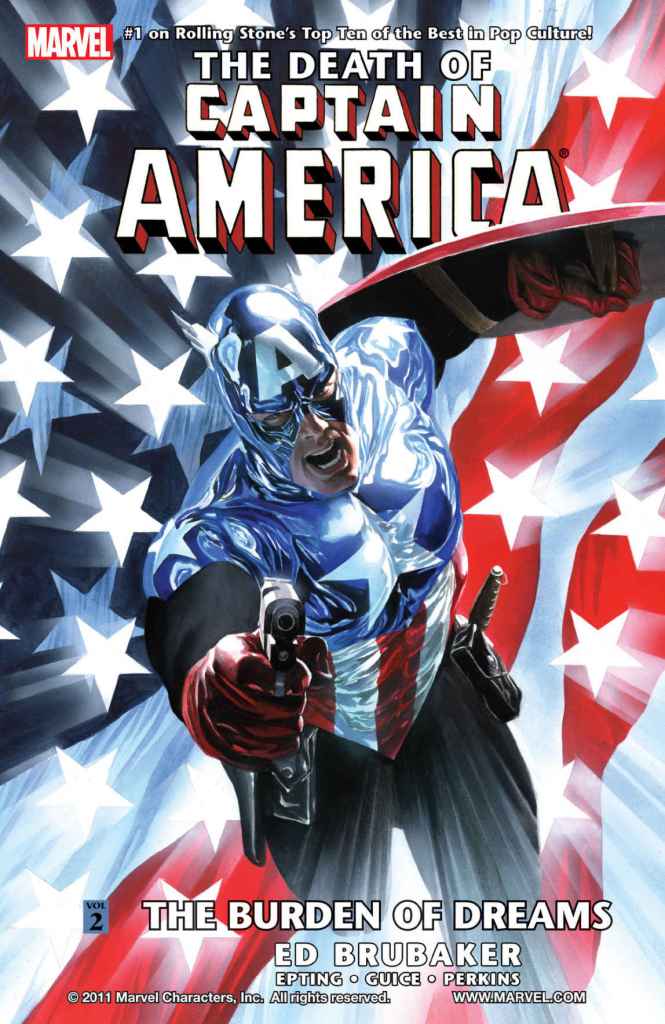 Rumor has it that Captain America is going to die in the next Avengers movie.

If that happens, I’m going to bawl my eyes out in the theater, but it’s not the first time Cap has kicked the bucket (or even the fourth). Let’s take a look at one of the best stories to come out of the Star-Spangled Avenger’s tragic demise: The Death of Captain America: The Burden of Dreams by Ed Brubaker.

Our Story So Far

The book starts with a handy recap: Cap is dead. His girlfriend, Agent 13, has been brainwashed by evil psychiatrist Dr. Faustus. Bucky was captured by Red Skull while trying to get revenge, and Iron Man, the Black Widow, and Falcon are attempting to launch a rescue mission.

Did I mention this happens right after Civil War? Half the superhero community is unregistered and on the run, and tensions are high. Bucky blames Iron Man for Cap’s death, and Falcon isn’t exactly thrilled with him, either. Black Widow is nominally on the side of registration, but predictably, it’s complicated.

The Next Captain America

Bucky attacks Iron Man in anger over Steve’s death, but after an emotional confrontation, Tony talks him into taking up the shield. Red Skull, Dr. Faustus, Arnim Zola, and a whole slew of other bad guys have set in motion a plot to destroy the US government, and the world needs Captain America.

With Black Widow for backup, Bucky Cap leaps into action to stop their plot. But Steve Roger’s shoes are hard to fill, and there’s a steep learning curve when it comes to being Captain America. Unfortunately, Bucky doesn’t have a lot of time to figure it out before Red Skull’s master plan destabilizes the entire country.

The art is perfect for this book. The realistic style and overall dark colors create just the right tone for spy/conspiracy thriller. The sheer number of villains makes for a complex plot as they work with, against, and around each other. And the relationship between Bucky and the Black Widow is a highlight, bringing warmth to the story.

If I have any complaint, it’s the treatment of Agent 13. She doesn’t have much to do besides get manipulated by Dr. Faustus and serve as the damsel in distress. Comics Agent 13 is a badass, unlike her movie counterpart who pales in comparison to her much more awesome aunt. (Long live Agent Carter!) But that’s a nitpicky critique, and overall this book is excellent.

The Winter Solider and Beyond

If you liked Captain America: The Winter Soldier, you’ll definitely like this book. Not only do the two have a similar style and tone, but the movie was heavily inspired by the storyline leading up to this graphic novel. It’s why a lot of people think Bucky will become the next Captain America in the movies.

If the movies handle it anywhere near as well as this comic did, I’m here for that. How about you? Grab a copy of The Death of Captain America and decide for yourself.

Have you read this comic? Are you emotionally prepared for Cap’s possible death in Avengers: Infinity War? Let me know in the comments!