Here are some superhero fiction books released in the last month or so that caught my eye in the Amazon jungle. I recommend checking out the samples and reviews before buying, as I haven’t read all of them—yet.

Sarah Buchanan lives a quiet, small town life, hiding one dangerous secret. She’s the world-famous superhero known as Skyrider, leader of the government-sanctioned superteam the Covenant. Not even her husband knows about her dual life.

When a legion of superpowered dervishes declare war on America, the Covenant must work around the clock to track down the mastermind behind them. With Sarah spending less and less time at home, and her excuses running thin on why she keeps showing up covered with bruises, the strain on her marriage reaches a breaking point. She wants nothing more than to quit being Skyrider and return to ordinary life, but when ghosts from her past threaten the world she faces the ultimate test: Can she save the world and still save her marriage? 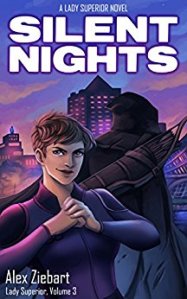 Lady Superior is down for the count. Vane, her archer companion, is on the hunt for revenge. Among the chaos, unlikely allies step up to help him bring down the man who tried to put her in the ground.

While Lady Superior recovers from the blast, she takes hard lessons to heart. The Ladykiller took a swing and missed. She won’t make the same mistakes twice.

The Powers That Flee

It’s October 1985, and sixteen-year-old comic book nerd Darin Forrester is given a special arcade token by a cute but mysterious girl. He soon finds himself granted super powers with a catch—they don’t stick around. With a revolving door of abilities, Darin must fight off a deranged villain on a power grab himself.

Brian Clopper delivers a sincere trip back to the 1980s where hair was big, music videos reigned supreme, comic book reading was resigned to social outcasts, and young science fiction geeks traveled at warp speed to track down the newest issue of Starlog.

Strike: The Plague of Stars (The STRIKE Series, Book 4)

It has been three years since Tobin Lloyd saved the world from the super-powered madman Rigel—and three years since he has seen his friends Orion, Keplar, and Scatterbolt from the world of Capricious. Unable to travel to the world of superheroes, he has adjusted to his normal life, and begun his senior year of college at Pinewood University in New Hampshire.

All Spencer really wanted was a normal life. College. A job. Maybe a research fellowship which culminated in freeing his mother from the psychic snow globe where he last saw her…

Then again, “normal” might be too much for the powerless son of the world’s most dangerous Augment to ask for.

Spencer is soon sucked back into his father’s world of weaponized superhumans. Augments long forgotten have emerged from their former prison with their powers amplified. While Spencer and his team race to contain the threats, a digital cabal weaves a vision of the future as infectious as the computerized plague set to deliver it.

Have you read any of these books? Read any other superhero fiction lately? I’d love to hear your recommendations in the comments!