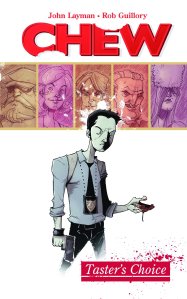 I know, I know. You’d never really say that. Superheroes are awesome. But let’s say you wanted to try something a little different, something unlike anything you’ve ever read before. Then have I got the comic for you.

Chew by John Layman and Rob Guillory is such a unique book. I’m not sure how to categorize it. Crime fiction? Science fiction? Humor? I don’t know, but whatever it is, it’s awesome.

In a world where 116 million people died from bird flu (or what the government claimed was bird flu. It’s a conspiracy!), the sale and consumption of poultry is illegal, and underground restaurants that serve chicken dinners have cropped up like speakeasies.

Crazy enough for you yet? Because it gets better.

Our hero is Tony Chu, and he’s cibopathic. What’s that mean? To quote the first issue, “That means he can take a bite of an apple, and get a feeling in his head about what tree it grew from, what pesticides were used on the crop, and when it was harvested. Or he could eat a hamburger, and flash onto something else entirely.” The only food he can eat without his powers acting up is canned beets, so he’s pretty much blessed with suck, as TV Tropes would say.

Tony’s also a cop, and it doesn’t take long for his abilities to be turned to crime-fighting. Since he has to taste something to get a psychic impression, this ends up with him eating some very gross stuff. Just…the grossest stuff. If you’re squeamish, this is not the book for you.

The character dynamics are fun. Tony has a hotheaded cyborg partner, a boss who hates him to comically extreme extents, and a perky food reporter love interest (who has neat culinary-related powers of her own). The plot has all the twists you’d expect from a book that could fit in the mystery/conspiracy genre, and there are lots of schemes Tony foils that hint at larger intrigues. The whole thing has a sort of dark, noir atmosphere yet somehow manages to support some really over-the-top humor. It’s a weird book, but weird in a good way.

If you’re interested, start with volume 1 and see where it takes you. I guarantee it’ll be to a place you don’t expect.

Have you read Chew? Have you read anything even remotely like Chew? Let me know your thoughts in the comments.