Hey super-readers. I featured Nancy O’Toole Meservier’s debut superhero novel, Red and Black, when it came out last August. With the release of the sequel, Black and Blue, Nancy’s here with a guest post that I hope you enjoy.

One of the possible topics Kristen gave me for this guest posts was to talk about some of the inspirations for the Red and Black series. And while I could touch on the various comics, books, movies, or superhero TV shows that have influenced me, the truth of the matter is the series would have never existed if it weren’t for the video game, City of Heroes.

City of Heroes was a superhero themed MMORPG released back in April of 2004, but I got to experience it a little early, thanks to a friend who had early access. I remember watching him run around a rich city scape as a green glowing figure and being fascinated. A video game where you could craft your own original superhero? I needed to sign up for that.

When the game was released, I picked it up immediately and crafted a sword wielding warrior that became known for dying a lot. Desiring a character with a few more hit points, I eventually made a petite tank who dressed in red and black. I remember looking at the model, thinking she had an Asian appearance, and naming her after a song I enjoyed at the time, Hikari.

Much like my frequently deceased swordswoman, as I spent more and more time with Hikari (secret identity, Dawn), I found her scant backstory growing into a more complex storyline, involving side characters, multiple villains, and romance. Before long, I had crafted two major arcs that I toyed with turning into a web comic. The one problem? I couldn’t draw.

And thank God for that, because Dawn’s original story was terrible.

The original concept involved Dawn getting her powers after being healed from an ill-defined, lifelong soap opera illness. On top of that the love interest (Alex) spent much of the story two timing our heroine by sleeping with the villain as he was romancing Dawn. And the villain (Calypso) had no motivation for her actions. The story had an additional unnecessary love triangle (likely influenced by the young adult books I was reading during the time), and either lacked or had far inferior versions of the side characters many consider their favorites, like Sunshine, Amity or Dana.

Thanks to my insufficient artistic ability, Dawn and Alex’s original origins stories remained buried in my mind as I played many hours of City of Heroes. And let me tell you, they were damn enjoyable hours. City of Heroes had all the classic superhero elements. There was a highly detailed character creator that allowed you to create your own costume. You gained experienced by taking down various villain groups including gangsters and zombies, or by completing missions where you got to do cool things like rescue hostages and stop bank robberies. You could create your own Justice League-esque team of superheroes (supergroups) or participate in more advance content called task forces. Admittedly, I mostly sat out on these, being primarily a solo player.

The game ended up having two expansions, City of Villains, which allowed you to explore the villainous side of the equation and Going Rouge which played with the concepts of good and evil.

I played a lot of hours of City of Heroes during college, but after graduation, things began to change. I found my days consumed by other activities, such moving to another state, finding a full-time job, attending grad school, planning a wedding, and struggling with establishing my writing career. As a result, City of Heroes ended up falling by the wayside. And it must have been that way for a lot of people because the game was eventually taken down in 2012.

(Of course, recently, a private server has popped up, but since that includes some rather…questionable legality, I think it’s smartest not to comment on that one.)

City of Heroes may have only been part of my life for a few years, but the characters I created for it clearly mattered. This is why, yeas later, I ultimately found myself turning back to the red and black-clad superhero I had created back when I was nineteen, pulling from her story to create both Red and Black and Black and Blue (which, fortunately, barely resemble their original concepts). After spending so many hours with these characters, I found that quite a bond had formed. Dawn and Alex had stories worth telling, and I wanted to share them with the world.

And for that, I thank City of Heroes. 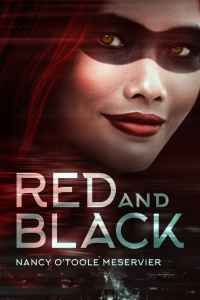 Dawn Takahashai knows all about superheroes.

She’s been a fan of them for years. So when she’s granted an impressive powerset of her own, she dives right in, eager to prove herself as Bailey City’s first superhero: Miss Red and Black.

Her first challenge is Faultline. He’s powerful, smart and, as a henchman for Bailey City’s first supervillain, standing right in her way. But that’s not the real problem. The real problem is that under the mask, Faultline is Alex Gage, a working-class guy trying to scrounge together enough money to help support his younger sisters.

And Dawn and Alex have a date next week.

The masks are off.

Dawn Takahashi has achieved her dreams by becoming Bailey City’s first superhero, but is it worth the cost?

After the fall of Calypso, Bailey City has been shaken. An anti-superhero movement, lead by former mayor Edison Kent, is starting to rise. Fortunately, most people are on Dawn’s side, viewing her superhero persona, Hikari, as an asset to the city.

Former supervillain Faultline is seen as a threat. The man behind the helmet, Alex Gage, spends his days keeping his head down, until his efforts to keep his identity concealed lead him straight to Dawn, and their unresolved feelings for each other.

On top of that, new players have arrived at Bailey City in the form of a secret organization that gathers information on empowered beings. Plus a mysterious figure that dresses in black and blue.