Happy Holidays! If you got an Amazon gift card this Christmas, then get ready to punch in that code and start buying. Superhero fiction authors did not take a vacation during the holidays, and we’ve got everything from new novellas to series box sets. As always, I haven’t read all of these books personally, so please take a look at the reviews and samples before purchasing. Now, feast your eyes on the awesome new books below.

From the award-winning author of Cookie Cutter Superhero and Kid Dark Against the Machine comes a brand new novella about girl reporters, superheroes, and interdimensional travel

In a world of superheroes, supervillains, and a machine that can create them all, millennial vlogger and girl reporter Friday Valentina has no shortage of material to cover. Every lottery cycle, a new superhero is created and quite literally steps into the shoes of the hero before them–displacing the previous hero. While Fry may not be super-powered herself, she understands the power of legacy: her mother is none other than the infamous reporter Tina Valentina, renowned worldwide for her legendary interviews with the True Blue Aussie Beaut Superheroes and her tendency to go to extraordinary lengths to get her story.

This time, Tina Valentina may have ventured too far.

Alongside Australia’s greatest superheroes–including the powerful Astra, dazzling Solar, and The Dark in his full brooding glory–Friday will go to another dimension in the hopes of finding her mother, saving the day, maybe even getting the story of a lifetime out of the adventure. (And possibly a new girlfriend, too.)

In a world full of super powers, Felix had a pretty crappy one.

After learning to harness his ability to modify any item he owns, he now runs a corporation that is rapidly expanding.

After tangling with the local Heroes guild they’ve finally settled into a semblance of stability. Sounds great on paper. Run your company, make money, be your own boss, settle down.

Except that with running a business, comes an inordinate amount of responsibilities. Like making sure everything keeps running and your people are paid. Worrying about the longevity of his company, Felix begins to expand into other cities. So they’ve packed up the car, put in all the requisite forms, gotten the approvals, and set out to start Legion up in a new city.

The problem though is the local government had no idea who they were selling permits to. Approving forms for.

To Felix and Legion.

And now they’re about to find out. 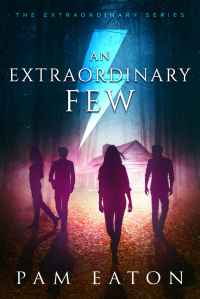 To be extraordinary is rare, but to be unique is downright dangerous.

Rebecca Hunter thought senior year would be all about hockey games, parties, dances, and college applications. When Becca’s absentee mom dies, things take a drastic turn. She just inherited a super power, but has no idea what it is. And now instead of worrying about homework, she’s got a secret group from the FBI at her door looking to recruit her.

Her days of being an ordinary seventeen year old are over, because she’s one of a hundred people left in the world with super powers. This covert group, Project Lightning, offers to train her, but soon they discover she doesn’t just have her mom’s power, she has more. And that’s never been seen before.

As they try to help her manipulate this new power, agents from Project Lightning go missing, and a few turn up dead. They’re being hunted. And when two men almost kidnap her, she realizes she’s being hunted too. What was supposed to be an amazing senior year has turned into brutal training to find the lost, protect those she loves, and harnessing this new power.

The world’s greatest villain has unretired for one last mission. Saving the world.

After a serious injury, Christoph “Gravitas” Holtz has retired from supervillainy. Heading into his silver years all he wants is to reminisce, garden, and teach his next-door neighbor’s daughter the finer points of proper villainy.

But when a classless young supervillain threatens Holtz and those he cares about, he turns to an old ally for help with one final mission.

When the mission goes wrong, Christoph will have to struggle against a dangerous enemy he helped unleash, his feelings for his superhero ex, and his own sense of what it means to be a hero or villain.

After accidentally killing her lover, Kate is a wreck. Vi tries to console her, but when things get sexy, Kate’s afraid she’ll hurt her too.

Steve says he wants to help, but his intentions become clear when Kate is suddenly teleported to the compound of the mastermind behind her modification.

Will Kate discover the secret behind her powers? And will she survive the sinister plans in store for her?

Fans of Modified, Volume 1 and 2 will enjoy this third installment in the short story series. New characters, snarkier comebacks and revelations are abound in this exciting volume. If you enjoy super powered geeky characters, profanity, and sexy situations, then pick up your copy today and get Modified!

Reader Discretion is Advised: If you are offended by strong language or sexual situations, for the love of God don’t buy this series.

by Bryan Cohen and Casey Lane 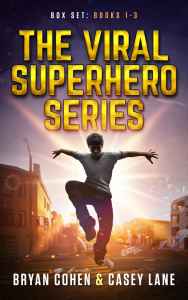 Ted Finley is your average suburban nerd, but when a group of thugs threaten to kill innocent people, something incredible happens. Gifted superhuman abilities during a seemingly random brunch, Ted quickly transforms from a nobody into a viral video sensation. Forced to navigate school and life with his newfound powers and fame proves to be difficult, but Ted’s biggest challenge lies ahead.

He’s not the only one with powers. And until he can determine his allies and his enemies, Ted may be the only thing keeping the world safe from annihilation.

* The Viral Superhero is an edited and revamped series that was previously published as Ted Saves the World.

Buy the box set today to watch an ordinary teen become a hero!

Now on its final voyage, the historical steamboat Natchez is known for her super-powered guest entertainers. But after the suspicious death of a crewmember, retired NY police detective Leo Storgman decides to make this incident his personal case. His findings only lead to a growing number of questions. Is there some truth behind the ghostly sightings of the steamboat’s first captain Wilbur Leathers? What secret does the current captain seem to be hiding? And could the Natchez be ferrying mysterious – and possibly dangerous – cargo onboard?

Now in development for TV: Rights to develop Wild Cards have been acquired by Universal Cable Productions, the team behind The Magicians and Mr. Robot, with the co-editor of Wild Cards, Melinda Snodgrass, as executive producer.

My name is Gavin.
I’m a cop.
I’m also from another world.

When a vigilante begins to target the relatives of convicted killers, leaving no clues and no apparent motive, Gavin must use all of his inhuman abilities to track down the perpetrator. It’s too bad that his powers are suddenly absent just when he needs them the most, to crack the biggest case of his career.

As he gets closer to the truth, he must face who he is and where he came from. He must also ask himself the ultimate question: why is he here?

And when the time comes, can he protect the Earth or will he lead to the demise of mankind?